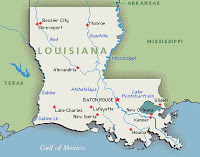 A gay couple in New Orleans is asking a federal judge to overturn that state’s ban on same-sex marriage after being denied a marriage license.

Kristoffer Bonilla, 33, and John Thomas Wray, 18, are asking a federal judge to strike down the constitutional amendment, which lawmakers and voters overwhelmingly approved in 2004. The men filed the lawsuit against several state and local officials on April 2, the same day they said they were denied a marriage license. It claims the state’s marriage amendment violates the First Amendment “by curtailing the right to marry based upon a religious interpretation of the nature and purpose of marriage itself.” “By failing to articulate a legitimate, compelling and secular interest for the restriction on marriage, the state has necessarily established a wholly religious civil institution,” it says.

In 2005 the Louisiana Supreme Court reinstated a constitutional ban on same-sex marriage after a lower court struck it down because the amendment violated a rule that requires that constitutional changes cover only one subject. So far no national LGBT rights group has commented on this lawsuit.