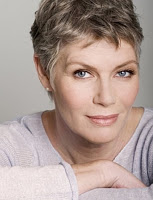 I would have sworn this was old news, but apparently Top Gun and The L Word actress Kelly McGillis never came out officially until now.

Fifty-one-year young Kelly McGillis is starting her “life in a whole different phase,” she told rocker and SheWired vlogger Jennifer Corday — ostensibly coming out as a lesbian. Corday, in her Girl Rock video blog, asks the Top Gun and The Accused star, that since she is single, is she looking for a man or woman, or both? In no uncertain terms McGillis responded that what she is looking for is “definitely a woman.” McGillis, a long-rumored lesbian who starred on The L Word as a closeted Army Colonel trying a Don’t Ask Don’t Tell case added that she is “done with the man thing.” She said she is “done with that, and needs to move on in life, and that’s another part of being true to yourself.” It has been a challenge personally for her, she added. McGillis said that realizing her sexuality has been an ongoing process for her since she was 12 years old, but through her life faced getting over being convinced that God was punishing her for being gay.

She Wired has video of the coming out interview. Now, Kelly…about your Top Gun co-star….