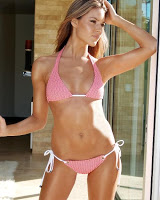 You just knew this was coming, right? Via Ben Smith at Politico:

Miss California, Carrie Prejean, who offered memorable opposition to same-sex marriage and a young, attractive new face for the movement against it, will appear tomorrow at a press conference hosted by the National Organization for Marriage at the National Press Club, according to a press release from the group. She’ll be launching a new ad, the second in what the group says is a $1.5 million campaign. The ad, the release says, will address:

“What happens when a young California beauty pageant contestant is asked, “Do you support same-sex marriage?” She is attacked viciously for having the courage to speak up for her truth and her values. But Carrie’s courage inspired a whole nation and a whole generation of young people because she chose to risk the Miss USA crown rather than be silent about her deepest moral values. “No Offense” calls gay marriage advocates to account for their unwillingness to debate the real issue: Gay marriage has consequences.”

And all the intertubes rubbed their hands in glee over the coming parody opportunities.