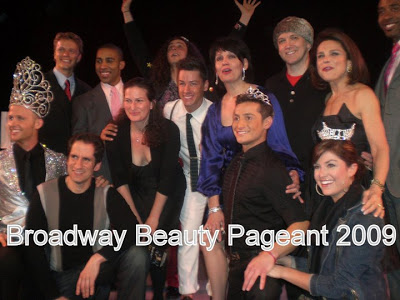 And what a night it was! Symphony Space was packed to the rafters with Gotham’s gay glitterati who were treated to a top-notch production featuring some of the greatest talents Broadway offers. The five contestants were drop-dead amazing, the judges were hilarious, and Tovah Feldshuh was in prime form. My personal highlight was chatting with Beth Leavel, whose performance in The Drowsy Chaperone played a huge part in bringing me back to that show four times (the only Broadway show I’ve seen more than once, in fact.)

Like American Idol, the audience chose the winner – a tough call for most us, I’m sure – but it was Hair’s Anthony Hollock who brought down the house with his combination trumpet solo/tumbling pass/Irene Cara impersonation. Mr. Broadway 2008 (Xanadu) Marty Thomas closed the show with a hilarious/serious take on I Will Always Love You and then it was downstairs to the after party. Fantastic night, great cause, fabulous show. Congratulations to Ali Forney Center executive director Carl Siciliano and Broadway Beauty Pageant creator Jeffrey Self. I love my people.

Full size versions of these photos can be found here.