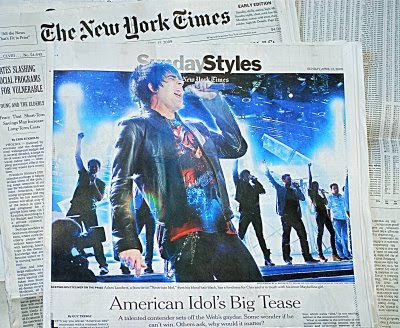 In today’s New York Times, Guy Trebay talks about American Idol favorite Adam Lambert’s love for eyeliner and whether a gay contestant can win the most popular show in America.

Let’s imagine, then, that among the assorted warblers and strummers and leather-lunged divas that have made up the renewable cast of hopefuls on the country’s No. 1 television show, you appear not as some talented hopeful with a shady backstory but as a theatrical creation with a message to sell beyond the usual will to prevail. You are swivel hipped and pillow lipped. You have an outsize talent and a fondness for Cher. You have blond hair dyed black and styled in an asymmetrical shag. At some long-ago moment, you gave in to your inner Maybelline girl. You are Adam Lambert, the contestant widely tipped as a favorite to be the next winner of “American Idol.” And the only thing standing between you and riches and the chance to play arenas may be a question currently burning up the Internet: Can a gay contestant win? Leave aside for a moment the answer to such a question, or even whether Mr. Lambert is gay. He may be. He may not. Fox, which owns “Idol,” is not saying; neither is the contestant himself.

It’s an interesting piece with quotes from film critic (and JMG regular) David Ehrenstein, Out Magazine editor Aaron Hincklin, and the author of this here website thingy.