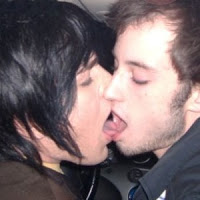 What Will Idol Do With Adam Lambert? JMG reader Guy points us to the comments section of an Entertainment Weekly piece that ponders why American Idol hasn’t profiled the personal life of openly gay contestant Adam Lambert. After all, we know know that one contestant used to sing his homework, one has a sister who is also blind, and one was just widowed. It’s an interesting comment thread, but the Freeper-types are beginning to pile on to a site that normally is quite gay-friendly.

I would stop watching immediately! The line has to be drawn somewhere. There is no difference between homosexuality and bestiality. I will not have my children in an environment where they are brought up to think homosexuality is normal any more than I would tell them it is ok to marry their uncle when they reach the age of 12. I am agnostic btw. Homosexuality is a sickness like depression or bipolar disorder and should be treated as such.

Okay, I just google-imaged Adam Lambert and now I’m sick to my stomach. There are several photos of him inserting his tongue into another dude’s mouth. SICK! That is totally twisted no matter how you slice it!! C’mon people, wake up! I’m wondering why Simon even likes this guy.

Bottom line: a huge number of people who watch Idol believe that homosexuality is wrong, a sin. If any contestant were to ‘come out’, he or she would not make it to the top (remember, even the Christians get a vote) AND the show’s ratings would take a nosedive. It’s popular in ‘enlightened’ circles and, especially, in the media to speak of homosexuality like it’s normal – reality check: most Americans still agree with God – homosexuality is wrong.

It goes back and back in the familiar fashion, but now I’m more curious than ever to see what American Idol does with Lambert and what the reaction will be.