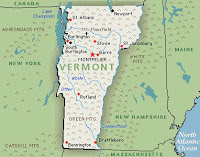 And now we’re one step closer in Vermont too.

The Vermont Senate voted 26-4 today in favor of the same-sex marriage bill. The bill will have third reading and vote Tuesday. All bills have three readings. It is designed for people to reconsider or amend an item, but it unlikely that a vote would change on a third reading. A similar measure begins moving through the House on Tuesday with testimony before the House Judiciary Committee. A full vote on that measure wouldn’t come before next week. “We’re not condoning homosexuality,” Sen. John Campbell, D-Windsor, told the Senate just before the vote. “What we’re doing is recognizing that some people are homosexuals.”