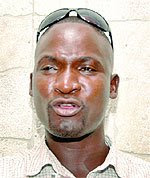 Check out this story from Uganda’s New Vision Online.

Matovu, who said he abandoned the practice two weeks ago, asserted: “Homosexuality is dangerous and dehumanising but is growing fast in Uganda.” He urged the Government and all concerned citizens to “wake up now before this abnormal practice is made to appear normal as the case has been in the West”. Another former homosexual, Charles Asiimwe, said the practice had spread to government offices, churches, schools and hotels. “Many business moguls are involved,” Asiimwe said. Oundo said the eight men would fight the vice because they were victims with a tormenting experience.

You must now click over to Jim Burroway’s piece at Box Turtle Bulletin, where he exposes how American members of the “ex-gay” group Exodus are touring Uganda to support the government’s crackdown on LGBT citizens. Exodus members have endorsed the proposed life sentence for gay sex in Uganda. It’s an astonishing series of heavily researched articles.