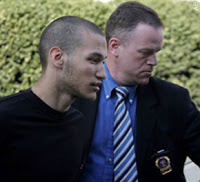 The George Weber murder case has been chum in the water for NYC’s tabloids, as it contains all their favorite buzz words. Teen Killer! Internet! Grisly Slay Scene! Dead Homo! But even the New York Post blanched at 16 year-old murderer John Katehis’ demand to be paid cash for an interview.

John Katehis — the Satan-worshipping 16-year-old charged with fatally stabbing radio newsman George Weber in a sex-for-cash-tryst gone bad — still had money on his mind at the Bellevue psych ward today. When visited by a Post reporter, Katehis greedily said he’d only tell his side of the story “for cash.” Wearing a light green jumpsuit and a menacing scowl on his face, Katehis again made clear there was only one way he’d spill the beans. “Is this a cash offer?” snarled Katehis. “Cash offers only!” Once it became clear no money would be exchanged, Katehis shot up and yelled again, “cash offers only!” and stormed out.

On Friday Katehis plead not guilty to the murder, despite reportedly having given the NYPD a complete confession.