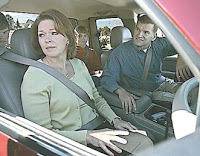 Former evangelical pastor Ted Haggard and his wife are planning another TV appearance, this time to talk about their marriage. The two are in Los Angeles taping an appearance on the Universal Fox show “Divorce Court,” to be broadcast nationally April 1. The show’s presiding judge, Lynn Toler, is interviewing the couple about how their marriage survived after a male prostitute from Denver alleged a cash-for-sex relationship with Ted Haggard in November 2006, executive producer Mark Koberg said. The scandal prompted Haggard to resign as president of the National Association of Evangelicals and New Life Church in Colorado Springs. The Haggards say their marriage and Christian faith are stronger than ever, and they want people to know that divorce is not the answer. “This is part of Ted’s journey,” Gayle Haggard said. “It’s made him a better man. I see what has happened as a divine rescue.” She said she was helped through her darkest hours by the biblical principles of forgiveness, compassion and steadfastness, along with her husband’s genuine repentance. The couple will be paid an undisclosed amount for the interview.

What’s next? Fucked Up Family Week on Wheel Of Fortune?

Previous MTA Reveals Fare Hike Plan
Next Merriam-Webster: Where Have YOU People Been? We Did That Six Years Ago