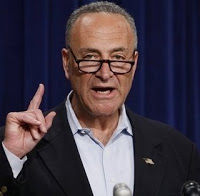 Sen. Chuck Schumer Comes Out For Marriage Equality And Repeal Of DOMA Schumer: “It’s time. Equality is something that has always been a hallmark of America and no group should be deprived of it. New York, which has always been at the forefront on issues of equality, is appropriately poised to take a lead on this issue.”

It’s hard to overstate the significance of this in the eyes of gay marriage advocates. With the ascent of Kirsten Gillibrand to fill Hillary Clinton’s vacant US Senate seat, Schumer was the last remaining statewide elected official who backed civil unions over full marriage equality. (Recall that one of the first issues Gillibrand “evolved” on was marriage, although her office has insisted she always personally supported it).

Clinton’s departure from the New York political stage arguably gave Schumer some breathing room on this issue. Both Clinton and Schumer were under pressure from the gay community (which includes some very heavy-hitting political donors) to change their position from supporting civil unions to backing marriage, but they both refused to budge. While Clinton was running for president, there was no way Schumer could move on this topic – no matter how much he might have wanted to follow the lead set by then-Gov. Eliot Spitzer and his LG, David Paterson – especially since Barack Obama also took the civil-union-only approach.

Thank you, Senator. Welcome to the light.