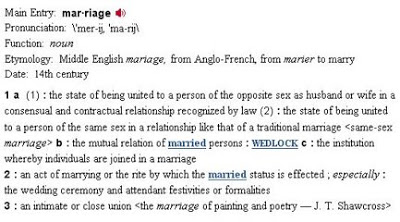 Marriage Has Been Literally Redefined

Well kids, we have done it. We have literally redefined marriage. And I say “literally” in the literal sense of the word. Check out the new definition of marriage according to Merriam-Webster. Of course, we’d rather see Section 1 of that definition as only one line saying: “Marriage: the state of being united to another adult in a consensual or contractual relationship recognized by law.” But, you know, baby steps. Bonus fun: the wingnuts are already pulling their hair out.

One of the nation’s most prominent dictionary companies has resolved the argument over whether the term “marriage” should apply to same-sex duos or be reserved for the institution that has held families together for millennia: by simply writing a new definition. “I was shocked to see that Merriam-Webster changed their definition of the word ‘marriage,’ a word which has referred exclusively to a contract between a man and a woman for centuries. It has now added same sex,” YouTube user Eric B. noted to WND.

Next time they scream, “You’re REDEFINING marriage!”, just tell them that train has left the station, or that ship has sailed, or whatever transportation metaphor your prefer. Heh.