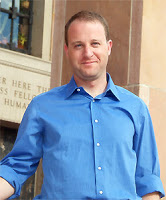 “I have to say, that when we say, ‘Who killed the Rocky Mountain News,’ we’re all part of it, for better or worse, and I argue it’s mostly for the better. We can’t just kill it and walk away. It’s important for all of us to reach out to some of those on the other side and present the progressive point of view.” – Openly gay U.S. Rep. Jared Polis (D-CO), telling a Netroots Nation meeting that bloggers are responsible for killing Denver’s Rocky Mountain News, which shut down last week.

Polis’ “dancing on the grave” of a dead newspaper is not being taken well by some folks in print and digital media. Jeffrey Goldberg at The Atlantic:

Uchh. I don’t know too many Democrats who think that the death of a newspaper is a positive development for society. And by the way, “All of us” are the new media? I’d like to read the investigations of government corruption produced by “all of us.” I imagine there are many journalists — and advocates of government accountability — wishing for the death of Polis’s congressional career right about now.