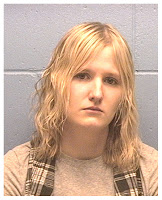 A woman in Wisconsin was charged with felony identity theft because she posted a photo of her ex-BF’s junk in the “M4M casual encounters” section of Craigslist. She also listed his work phone number and invited men to call for phone sex.

Meet Kari Heath. The Wisconsin woman, 20, is facing a felony charge for allegedly posing as an ex-boyfriend and posting a Craigslist personals ad seeking other men to call him at work and “talk dirty to him.” According to a criminal complaint, a copy of which you’ll find here, Heath placed the ad last month after arguing with her boyfriend Joseph Strasburg. The ad, which was posted in Craigslist’s “Casual Encounters” section, included several photos of the 24-year-old Strasburg, including one explicit image, and his business phone number. Heath’s former beau contacted cops when a man called him about the online ad. Strasburg, 24, told investigators that Heath subsequently sent him a text message admitting responsibility for the prank, which resulted this week in her arrest for identity theft. When interviewed by police, Heath admitted placing the online ad in Craigslist’s “personal column, homosexual section.”

I’ll admit I chuckled over this story on first read, but then I thought about how I’d feel if he’d posted her photo and invited men to call. I also recall when a male acquaintance of mine did this to HIS ex, which totally backfired when the ex hooked up with half the callers.