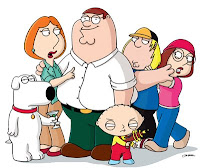 Predictably, fundies are filing an FCC complaint over Sunday’s “Peter Goes Gay” episode of Family Guy and are calling on the show’s sponsors to suspend advertising. (Feel free to stretch and yawn.) From the fundie-run Parents Television Council:

I don’t disagree that this episode of Family Guy was one of the most crude things ever seen on television. But so what? The show was preceded by a stern warning to parents and I believe there are somewhere in the neighborhood of 11 million other channels.

The PTC files complaints on almost every show on TV, including fluff like Friends (likely because of the lesbian wedding episode). Meanwhile the rest of us get served dumbed and watered down nonsense because fundie parents don’t know how to use the blocking services provided on every cable box in America. Hell, I had to enter a PIN just to watch CNN at my (relatively) liberal sister’s house. There’s a reason why almost every memorable series in the last ten years has been on pay cable. It’s spelled P-T-C.