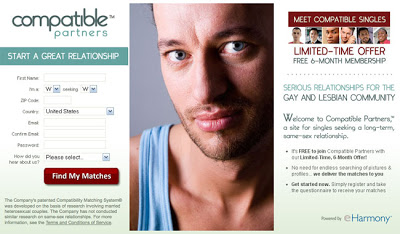 As of today, EHarmony comes out of the closet. The adamantly heterosexual dating website, which has accepted only male-female couples since its inception in 2000, is launching a gay matchmaking service called Compatible Partners. But EHarmony’s new relationship with the gay community is more like a shotgun wedding: The company agreed in November to start the dating service as part of a settlement with the New Jersey attorney general in the wake of a discrimination suit. Dating site consultant Mark Brooks says Compatible Partners will be watched closely. “This will be one of the most scrutinized products in Internet dating,” said Brooks, who hasn’t worked for EHarmony. “They will have to introduce an A1 product.”

Do you really want to give them your money?