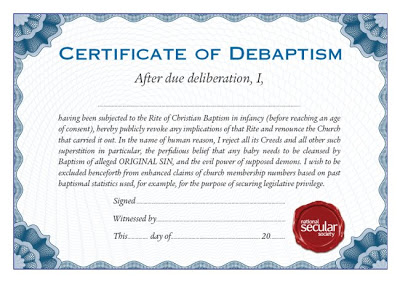 Some atheists are trying have their baptism records expunged from official church records. From the UK:

The National Secular Society would like the Church of England to devise a formal procedure for cancelling baptisms, with a change in the baptismal roll as part of it. In the face of resistance from the Church, the society has come up with a document of its own. The “Certificate of Debaptism” has a deliberately home-made look, with its mock-official decoration and quasi-official language. Sitting on a bench in the grounds of St Jude’s Church, John Hunt intoned the opening lines. “I, John Jeffrey Hunt, having been subjected to the rite of Christian baptism in infancy… hereby publicly revoke any implications of that rite. I reject all its creeds and other such superstitions in particular the perfidious belief that any baby needs to be cleansed of original sin.” The society’s president, Terry Sanderson, says the certificate is not designed to be taken too seriously, and he suggests displaying it in the loo. However, he says, it has now been downloaded more that 60,000 times, and has taken on a life of its own. “The debaptism certificate started out as a kind of satirical comment on the idea that you could be enrolled in a church before you could talk, but it seems to have taken off from there. People are beginning to take it seriously.”

According to the story, British churches will not remove your name from the rolls of the baptized, because “you can’t remove something from the record that actually happened.” Therefore, the names of those who wish to renounce their baptisms will forever bloat the official count of church members. Hmm, I once registered as an Independent. That actually happened and I undid it without a problem.

Previous CNN On DADT
Next Sign Of The Times