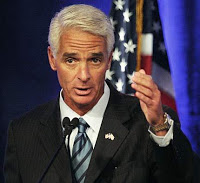 In a move that angered some conservatives but could please minority supporters, Gov. Charlie Crist has named Circuit Judge James Perry of Sanford to the Florida Supreme Court. Conservative interest groups including the National Rifle Association, the Florida Family Policy Council and Florida Right to Life had advocated 5th Circuit Court of Appeals Judge Alan Lawson, calling him more qualified. Perry, 65, a registered Democrat with a history of community involvement and occasional involvement in civil rights litigation, was appointed to the bench by former Gov. Jeb Bush in 2000.

Some of the groups who backed Lawson charged that Crist was seeking to win black support for next year’s U.S. Senate race.Crist has said he’s considering running for the Senate instead of running for re-election. “It’s a politically calculated move,” said Adam Goldman, legislative vice president of Florida Right to Life. “Gov. Crist really is taking a risk. I’m sure there’s going to be a primary for the Senate race, and he’s not doing himself any favors.” John Stemberger of the Florida Family Policy Council called Crist’s decision, “stunning and profoundly disappointing.”

LGBT rights groups had supported Perry’s appointment. And anything that “profoundly disappoints” the Family Policy Council is good news for us, whatever the motive.