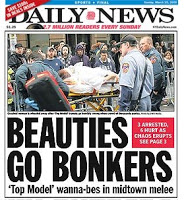 Pandemonium, chaos, rioting, whatever you want to call it – that was the scene yesterday outside the America’s Next Top Model auditions at CW Studios in Manhattan. After thousands of women began pressing early arrivals against the walls and barricades, a nearby car started smoking and a couple of idiots apparently thought they could thin the crowd by shouting, “There’s a bomb!”

Screaming as they ran for their lives, hundreds of hotties in heels toppled over barricades along W. 55th St. after several people in the crowd started yelling, “There’s a bomb!” By the time the model madness ended, two women were hospitalized and two others and one man were busted for inciting a riot, authorities said. “The girls were running like it was 9/11 part two,” said Jennifer Brown, 27, of Kensington, Brooklyn. “I feared for my life.” The audition for the The CW show, which for the first time was open to women under 5-feet-7, was doomed from the start, several said.

Scores of aspiring models slept overnight outside the Park Central Hotel, hoping to be the first to sashay before the hit show’s casting agents. But shortly after the sun rose, women began arriving and lining up indiscriminately. Tensions quickly boiled over. Things only got worse when the dolled-up ladies were told if they stepped out of the line, they couldn’t come back in. “I had to pee in a cup and change my clothes in the street,” said Mona Knight, 18, of the Bronx, who slept on the street. “There was no organization whatsoever.” Cops arrived and placed barricades along the street. But by that point, there were already several thousand women lined up. A handful of women started fainting after getting pressed up against the wall, witnesses said.

It’s a ridiculous story, no matter how you look at it, but the video is pretty scary. Police report that once the chaos started, some men in the crowd started snatching purses.