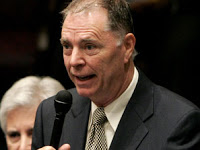 “Opponents of President Obama are raising the birth certificate issue as a means of questioning his eligibility to serve as president,” Posey said in a statement. “This bill, by simply requiring such documentation for future candidates for president, will remove this issue as a reason for questioning the legitimacy of a candidate elected as president.”