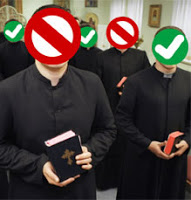 I’d love to see the questions on the test.

Melbourne Catholic Church has confirmed it is following Vatican recommendations to test would-be priests to ensure they are not gay. The head of the Vatican committee which released the guidelines has also stated that celibate gays must also be banned because homosexuality is ‘‘a type of deviation’’. Archdiocese of Melbourne spokesman James O’Farrell told Australian newspaper the Herald Sun that Carlton’s Corpus Christi Catholic seminary was using the recommendations but would not comment further.

Will they be probed “down under” and dismissed if they like it?