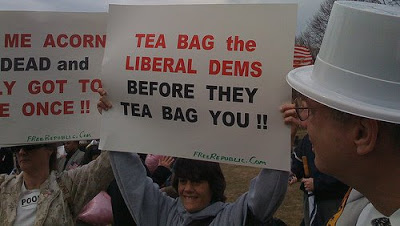 Playboy Magazine, of all sources, is claiming that this weekend’s “tea party” anti-Obama rallies around the nation were not, in fact, a spontaneous burst of grassroots outrage prompted by CNBC host Rick Santelli’s viral YouTube clip, but were actually a carefully plotted campaign planned months ago.

What hasn’t been reported until now is evidence linking Santelli’s “tea party” rant with some very familiar names in the Republican rightwing machine, from PR operatives who specialize in imitation-grassroots PR campaigns (called “astroturfing”) to bigwig politicians and notorious billionaire funders. As veteran Russia reporters, both of us spent years watching the Kremlin use fake grassroots movements to influence and control the political landscape. To us, the uncanny speed and direction the movement took and the players involved in promoting it had a strangely forced quality to it. If it seemed scripted, that’s because it was.

What we discovered is that Santelli’s “rant” was not at all spontaneous as his alleged fans claim, but rather it was a carefully-planned trigger for the anti-Obama campaign. In PR terms, his February 19th call for a “Chicago Tea Party” was the launch event of a carefully organized and sophisticated PR campaign, one in which Santelli served as a frontman, using the CNBC airwaves for publicity, for the some of the craziest and sleaziest rightwing oligarch clans this country has ever produced. Namely, the Koch family, the multibilllionaire owners of the largest private corporation in America, and funders of scores of rightwing thinktanks and advocacy groups, from the Cato Institute and Reason Magazine to FreedomWorks. The scion of the Koch family, Fred Koch, was a co-founder of the notorious extremist-rightwing John Birch Society.”

The story notes that the internet domain for the tea party events was registered in August 2008.

Previous DADT Repeal To Be Introduced Today
Next Thursday: Prop 8 Overturn Arguments To Be Heard By CA Supreme Court