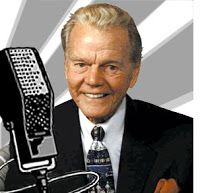 And That’s The End Of The Story Known for his resonant voice and trademark delivery of “The Rest of the Story,” Harvey had been heard nationally since 1951, when he began his “News and Comment” for ABC Radio Networks. He became a heartland icon, delivering news and commentary with a distinctive Midwestern flavor. “Stand by for news!” he told his listeners. He was credited with inventing or popularizing terms such as “skyjacker,” “Reaganomics” and “guesstimate.” “Paul Harvey was one of the most gifted and beloved broadcasters in our nation’s history,” ABC Radio Networks President Jim Robinson said in a statement. “We will miss our dear friend tremendously and are grateful for the many years we were so fortunate to have known him.” In 2005, Harvey was one of 14 notables chosen as recipients of the presidential Medal of Freedom.

Back in the days before those fancy FM stations, I listened to Paul Harvey almost every morning before school.

Previous Snow Day
Next DADT Repeal To Be Introduced Today