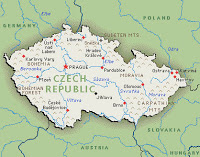 Your Czech Is In The Mail The Czech Republic has come up with a novel way to deal with unemployment.

The Czech Republic will offer a free plane ticket and 500 euros ($649) to foreign workers who voluntarily agree to return home after losing their jobs in the economic downturn, the government said on Monday. The sweeteners are among measures to cope with security risks stemming from rising unemployment among foreign workers in the EU member country, Interior Minister Ivan Langer said. In the past years, the fast-growing Czech economy, led by the car industry, lured cheap labor mainly from Ukraine, Slovakia, Vietnam, Mongolia and Moldova. Langer said many unemployed foreigners lacked cash to pay for a ticket home, as they had been saving to pay excessive fees or bribes — up to $12,000 — to agencies that secured them jobs in the Czech Republic.

Czech unemployment is 6.8%, almost a full point lower than the United States.