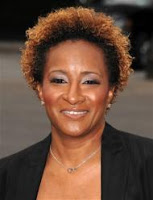 In what may be a first for an openly gay person, Wanda Sykes will host this year’s White House Correspondents’ Dinner.

Wanda Sykes will soon get the chance to make fun of President Barack Obama to his face. The comic actress said Thursday that she has been selected as the entertainer at the annual White House Correspondents’ Association annual dinner in Washington, slated for May 9. Obama is expected to attend the black-tie affair at the Washington Hilton and to follow in his predecessors’ tradition by putting on a comedy act of his own. The guest list of some 2,000 people will likely include the usual mix of Washington elite, White House press corps and Hollywood celebrities.

“The first thing I did when they asked me to do this gig — I made sure my taxes were paid,” quipped Sykes, taking a dig at the withdrawal of former U.S. Sen. Tom Daschle from Obama’s cabinet due to unpaid taxes. Sykes, who booked the gig this week, said the idea of performing for such a high-profile crowd is “scary but very exciting.” The dinner has tripped up comedians before. Rich Little and Stephen Colbert both provoked criticism of their performances before the crowd. She said it’s her job to “poke fun and ridicule,” and even a popular figure like Obama isn’t off limits. She already has some ideas about what she could mine for laughs. For example, she noted, Obama can be “a little long-winded. So we can get him on that.”

I’m not sure anybody could ever top Stephen Colbert from a couple of years ago, but this should be great.

Previous Till The End – Tom Goss
Next UK: Cocaine Now Cheaper Than Beer