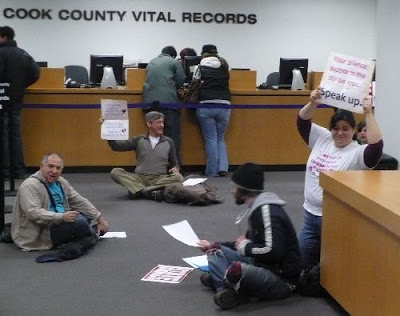 Seven marriage equality protesters were arrested for criminal trespass at a sit-in at the Cook County Office of Vital Records in Chicago yesterday as hundreds more protested outside.

Buddy Bell, Dale Fecker, Dan Ware, Danielle Karczewski, Jeff Graubart, Erica Chu, and Nick Ferrin had infiltrated into the Bureau shortly before the protest and when clerks refused to issue Bell and Fecker a marriage license, Bell yelled “We demand equality,” which was the signal for the others to begin sitting in. Meanwhile, about 400 protesters rallied outside the Bureau and then marched to the Bureau’s doors with a chant that’s been popular here since last spring, “Obama, Obama, let mama marry mama.” (The bipartisan counter-point chant was “McCain, McCain, he’s just insane.”)

Even though the office closed at noon, officials appeared sympathetic and were willing to wait the protesters out. The arrests did not take place until four hours later when the protesters were charged with a Class C misdemeanor. The “Marriage Equality 7” were released at 2:15 AM. Here’s an unedited video of the event.