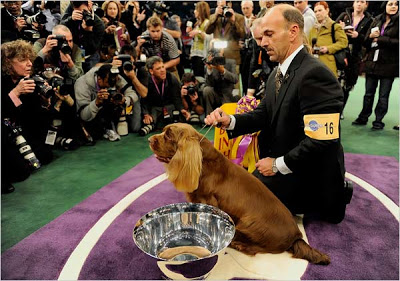 Ten year-old Stump, a Sussex spaniel, has become the oldest dog ever to win Westminster.

At 10 years old, Stump the Sussex spaniel should be well into his dotage. Instead, the dog who technically retired four years ago took home Best in Show on Tuesday at the 133rd Annual Westminster Kennel Club show at Madison Square Garden, becoming the oldest to win the award. Stump, officially named Ch. Clussexx Three D Grinchy Glee, might have surprised aficionados, who had their eye on a giant schnauzer, but the crowd clearly preferred the jaunty spaniel. Stump was greeted with deafening applause each time he plodded around the ring. It was the first time that a Sussex spaniel won the top prize, although the breed, which originated as a hunting companion in England, was among the first to be recognized by the American Kennel Club.

The judge was unaware of Stump’s age.