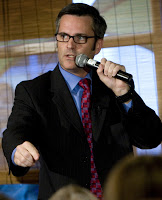 A citizens group in Portland, Oregon has launched a web effort to recall openly gay Mayor Sam Adams over the Beau Breedlove debacle.

The Web site, www.recallsamadams.com, says Adams, who lied about his relationship with an 18-year-old legislative intern in 2005, doesn’t deserve to run the city. “Mayor Adams has many great ideas for our city, yet lacks the public’s trust and political capital to get them implemented,” said Jasun Wurster, the Web site’s volunteer spokesman. The Oregon Constitution prevents volunteers from collecting signatures until July 1, 2009. The goal of the volunteers is to have more than 2,000 volunteers ready to collect 50,000 signatures. More than 31,000 signatures are needed to remove Adams, who took office Jan. 1st and is serving his first term.

Some are calling for Adams to resign before a recall can take place.