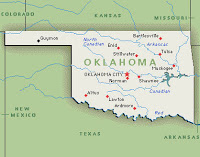 Spurred by President Obama’s stimulus package, today the Oklahoma House passed a bill declaring the state sovereign from any rule of the federal government not explicitly mentioned in the Constitution, the first shot in a growing national movement intended to give states the power to defy federal laws on a broad range of issues from abortion to gun control to hate crimes.

Via the Christianist site WorldNetDaily:

Eight other states have sovereignty bills pending, another twelve have bills on the way. Some legal sources call the bills merely symbolic, saying that the Supremacy Clause of the Constitution renders such efforts moot. Others are calling the sovereignty movement the thin wedge of a coming secessionist effort largely driven by disagreements over social policy issues such as gay rights, immigration, and freedom of religion.