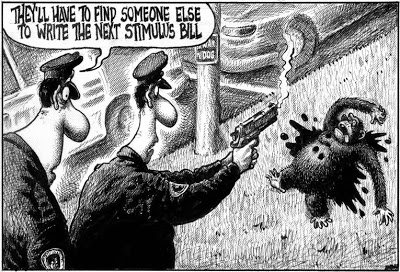 Achieving the impossible, scumbag New York Post cartoonist Sean Delonas has outdone even himself with today’s cartoon combining yesterday’s bizarre “monkey critically injures woman” story with a reference to Barack Obama and the stimulus bill. Outrage has been immediate and widespread as thousands of news stories condemning the cartoon have already been posted. Al Sharpton, never a fan of the Post, has weighed in.

The cartoon in today’s New York Post is troubling at best given the historic racist attacks of African-Americans as being synonymous with monkeys. One has to question whether the cartoonist is making a less than casual reference to this when in the cartoon they have police saying after shooting a chimpanzee that “Now they will have to find someone else to write the stimulus bill.” Being that the stimulus bill has been the first legislative victory of President Barack Obama (the first African American president) and has become synonymous with him it is not a reach to wonder are they inferring that a monkey wrote the last bill?

The NY Post regularly publishes Delonas cartoons which depict gay men in bed with farm animals or flittering above the ground in ballerina drag. Let’s hope that this repulsive cartoon is the final straw to end his career.

UPDATE: Gawker has posted a gallery of Sean Delonas’ most offensive cartoons.