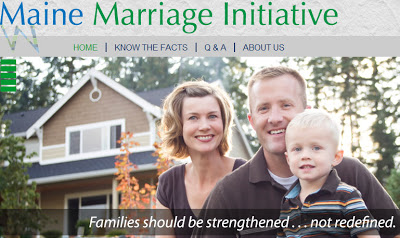 The Maine Marriage Initiative has launched a website to help residents contact their legislators and complain about the coming vote on marriage equality. Note the perfect Aryan family depicted in their header.

Maine Marriage Initiative was established with the goal of informing Maine people about the consequences of the legalization of same-sex marriage. Maine Marriage Initiative is a coalition of concerned Maine citizens committed to preserving traditional marriage in the state. We believe that all Maine citizens are entitled to equal rights (JMG: SNORT!) and respect regardless of their gender, race, creed or sexual orientation. We further believe that the values exemplified in traditional marriage are optimally beneficial to society, and therefore do not believe that changing the definition of marriage to include same-sex couples is warranted or advisable. The objection(s) to same-sex marriage are based not only on religious tenets but also human reason and the good of society at large.

Although they are too chickenshit to say so on their site, the Maine Marriage Initiative is actually the work of Focus On The Family and the Portland Catholic Diocese. Maine’s legislature is being presented with a marriage equality bill by state Sen. Dennis Damon, but the GOP is positioning opposing bills, including one to constitutionally ban same-sex marriage.