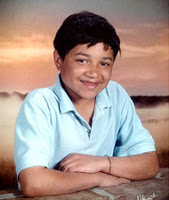 Lawrence King’s Family Sues Everybody For Not Destroying His Gayness The family of murdered gay teen Lawrence King has filed suit against just about everybody that ever knew him for not insisting that he “tone down” his feminine ways. Because that’s why he was murdered. Not because Brandon McInerney was a Nazi-obsessed skinhead wannabe who hated gays.

The family of a gay teenager who was shot to death in class filed a wrongful–death lawsuit that accuses the school district, a shelter and a homosexual rights organization of failing to protect him. The suit, which seeks unspecified damages, was filed Feb. 11 in Ventura County Superior Court. Larry King, 15, of Oxnard, was killed in February 2008. His classmate at E.O. Green Junior High, Brandon McInerney, was charged as an adult and has pleaded not guilty to first–degree murder and a hate crime. If convicted, McInerney could face 51 years to life in prison. McInerney, now 15, allegedly shot King twice in the head in English class. Prosecutors said there had been rising tension between the two after the eight–grader told McInerney he loved him. The 18-page lawsuit filed by King’s parents and brother names nearly two dozen defendants. It claims that everyone from King’s teacher to his social worker failed to urge the effeminate teen to tone down flamboyant behavior. The suit also claims they failed to heed McInerney’s alleged threat to kill King a day before the shooting.