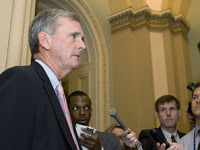 Gregg Nominated For Commerce, No Senate Supermajority For Democrats As expected, today Barack Obama nominated Sen. Judd Gregg (R-NH) to be his Secretary of Commerce in a deal that included New Hampshire Gov. John Lynch (D) appointing a Republican to replace him in the Senate.

Therefore, there will be no supermajority for the Democrats in the Senate.

Lynch has tapped New Hampshire politico Bonnie Newman, who once worked for Reagan and Bush I. Newman is a moderate Republican and is considered to be a weak opponent for whomever the Dems throw up against her in 2010. In fact, some are speculating that Lynch has asked Newman not to run at all. I’ll see what I can dig up about Newman’s positions on LGBT rights.