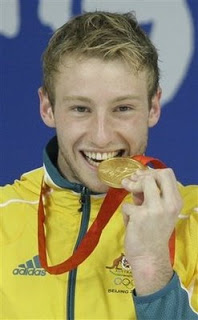 While it’s not in Stephanie Rice’s league, Mitcham’s year-long contract with Telstra is a “relief” for the diver, who has stuggled to attract corporate interest, despite his final dive receiving the highest single-dive score in Olympic history. He blames the current economic crisis, rather than his sexuality, for the sponsorship drought, but is grateful that Telstra has backed him: “Hopefully, this will have a snowball effect. If I can get the opportunity where I would be able to train without having to worry about paying the bills, that would be the ultimate goal.” Mitcham said without it, it would be hard to train for the London Games.