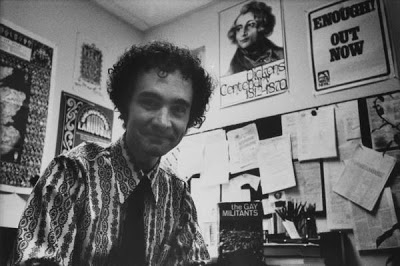 Noted gay historian and pioneering activist Donn Teal (pictured above in a 1971 photo) has died in NYC at the age of 76. From an obituary written by David Carter:

G. Donn Teal, of 304 West 75th Street, New York, died February 3, 2009 after a long illness. He was 76 years old. Born in Columbus, Ohio, on October 26, 1932, he was one of the founders of the Gay Activists Alliance (GAA) organization in late 1969. On February 23 of that year, his pro-gay New York Times article, “Why Can’t ‘We’ Love Happily Ever After, Too?” appeared: a protest against the “doomed misfit/sinner” stereotype of American gay men and lesbians in film, on stage, and in literature. The article provoked great response, and was followed on June 1 by “Why Record Homosexual Anguish?”, a Times review of A&M Records’ original-cast recording of Mart Crowley’s play “The Boys in the Band.”

More importantly, he wrote the first history of the gay liberation movement, “The Gay Militants” (Stein & Day, 1971; St. Martin’s Press, 1995), as well as articles in The Advocate, Ovation, Musical America, and other magazine and newspapers, notably the Village Voice, in which appeared “Straight Father, Gay Son: A Memoir of Reconciliation” on June 26, 1978; the article was later republished under Mr. Teal’s nom de plume, Roger Forsythe, in Ralph Keyes’ 1992 collection for HarperCollins, Sons on Fathers.

He was the only child of Gerald Donaldson Teal and Helen Pearl Hileman. Sometime after his mother’s death in 1944, Mr. Teal went to live with his maternal grandparents, Jesse and Katherine Hileman, and later moved with them to Bradenton, Florida. He graduated cum laude and Phi Beta Kappa from the Florida State University, Tallahassee, and received a Master’s degree from the University of Pennsylvania. After a few years of teaching high school French in Philadelphia and New York State, he settled in New York City, where he pursued a career in publishing, most notably at Ovation Magazine, where he wrote interviews and reviews, Harry N. Abrams, and Charles Scribner’s Sons. Starting in the early 1960s, he made several trips to France, The Netherlands, Belgium, Austria, where he reported on music festivals, and Italy. He eventually became a freelance editor, with clients such as Sarpedon, a publisher of military history books, the Sterling Publishing Company, and Shapolsky.

Mr. Teal will be buried in Columbus, Ohio. A memorial service will be held in New York at a time to be determined. Please do not send flowers; donations may be made in his memory to GMHC.