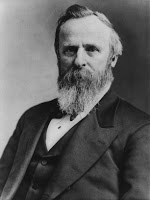 Here’s a bizarre President’s Day fact. The most popular former U.S. president in Paraguay is Rutherford B. Hayes.

Forget Lincoln or Washington. Rutherford B. Hayes — a one-term U.S. president who is undistinguished at home — has a holiday, a province, a town, a museum and a soccer team all named in his honor, thanks to an 1878 arbitration in which he handed Paraguay 60 percent of its land. “If it weren’t for Hayes, Paraguay would have a smaller territory than it has today,” said Salvador Garozzo, director of the municipal museum in the town of Villa Hayes, capital of Presidente Hayes province. After a regional war in the late 1800s, Argentina and Paraguay asked the United States to decide a bitter dispute over Paraguay’s Chaco region — a swath of blistering-hot terrain about the size of Michigan that today is an important source of cattle ranching. Archives indicate that a low-level State Department official most likely drew up the ruling that Secretary of State William Evarts then handed to Hayes to sign, said Tom Culbertson, executive director of Rutherford B. Hayes Presidential Center in Fremont, Ohio.

Now we know something about Paraguay.

Previous Apology Of The Day
Next Redundonyms