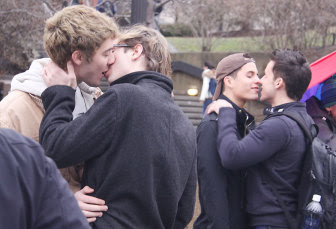 The University of Colorado wasn’t the only place to stage a Valentine’s kiss-in for homo visibility today.

Love — or, at least, lust — was in the air on Ho Plaza at 12:15 p.m. A group of roughly 20 students lined up to hold a colorful banner that read “QUEER KISSIN’ … in progress” and then proceeded have a queer kiss-in, which lasted about five minutes. Direct Action to Stop Heterosexism sponsored the event, according to kiss-in participant Ashley McGovern ’09. She explained that heterosexism is “kind of like homophobia except heterosexism has to do with all facets of society … so the normalization of heterosexuality in society.” Heteronormativity refers to the idea that heterosexuality is the “normal” sexual orientation. This includes the notion that people fall into two discrete categories — male and female — and that sexual relations are normal only between two people of different sexes.

I know y’all are wondering about “Ho Plaza.” The plaza was a gift from the Ho family which has had five members graduate from Cornell.