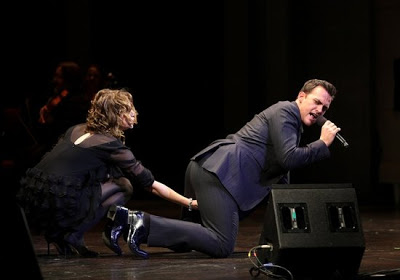 The Broadway sites have posted their coverage of Monday’s Broadway Backwards 4, the annual all-star fundraiser for the NYC LGBT Center in which classic showtunes are given a gay twist. Above is Broadway World’s Walter McBride’s shot of Cheyenne Jackson bottoming for Sandra Bernhard. McBride has many more photos here.

Go to Theater Mania for a great photo recap by Tristan Fuge. Broadway.com has a lengthy clip of performances and interviews posted, which for some reason won’t embed here. Go see it. And AfterElton’s Michael Portantiere has posted a series of super hot performance shots, including the one below of Florence Henderson. Below that is the LGBT Center’s interview with Jai Rodriguez and his partner. My own review from yesterday is here.