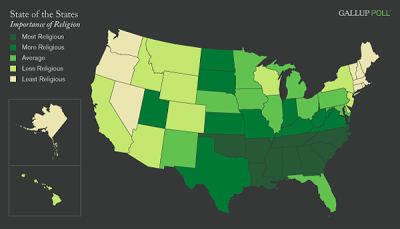 The question of why residents of some states (e.g., Mississippi and other Southern states) are highly likely to report that religion is an important part of their lives, while residents of other states (e.g., Vermont and other New England states) are much less likely to report the same is fascinating, but difficult to answer simply. Differing religious traditions and denominations tend to dominate historically in specific states, and religious groups have significantly different patterns of religious intensity among their adherents. The states have differing racial and ethnic compositions, which in turn are associated with differing degrees of religiosity. Certain states may attract in-migrants with specific types of religious intensity. In addition, there may be differing “state cultures” that are themselves associated with life approaches that give varying degrees of credence to religion as a guiding force.

I find it mildly interesting that each of my four out-of-state moves has been to a less “green” one. NC-FL-CA-NY. I guess one of the “white” states is next.