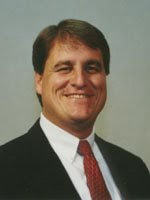 Seilor was opposed by the gay political group Dolphin Democrats, who published ads noting his endorsement by Jim Naugle. The legitimacy of Seiler’s candidacy was questioned early in the campaign when he rented a home six blocks from his longtime home in adjacent Wilton Manors, where Seiler was mayor from 1998-2000, in order to establish residency inside Fort Lauderdale’s city limits. Seiler’s state legislative district included a portion of Fort Lauderdale.

Our own Father Tony ran into Mayor-Elect Seiler late in the day outside his polling place and did the impromptu interview below, in which Seiler pledges support for the LGBT community on such issues as domestic partners and gay adoption, but say’s “we not there yet” in regards to marriage equality. While mayor of the very gay Wilton Manors, Seiler supported the enactment of that city’s domestic partners legislation.

Previous We’re Running Out Of Bullets
Next “Inauguretha (My What?)”