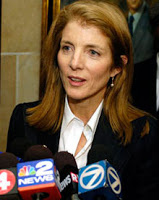 The New York Post claims that Gov. Paterson has made the decision to name Caroline Kennedy to replace Hillary Clinton in the Senate.

Despite claims that he’s still undecided, Gov. Paterson is “certain” to pick Caroline Kennedy to replace Hillary Rodham Clinton in the US Senate, several unhappy contenders for the job have told friends and associates in recent days. The contenders based their conclusion on the view that Paterson, after nearly two months of indecision, would “greatly embarrass” and “entirely humiliate” Kennedy, anger her prominent political family and even offend President-elect Barack Obama by picking someone other than President John F. Kennedy’s daughter. As for the governor’s claim to be weighing a last-minute finalist, the contenders agree with a close Paterson friend who said, “It’s clear David is just trying to play mind games with the press.”

I watched Paterson on Larry King last night and he was indeed coy, telling King, “My pick to be the new junior Senator from New York is…….going to be announced in a few days.”