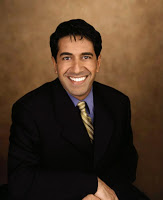 Sanjay Gupta To Be Surgeon General Gupta has told administration officials that he wants the job, and the final vetting process is under way. He has asked for a few days to figure out the financial and logistical details of moving his family from Atlanta to Washington but is expected to accept the offer. When reached for comment today, Gupta did not deny the account but declined to comment. The offer followed a two-hour Chicago meeting in November with Obama, who said that Gupta could be the highest-profile surgeon general in history and would have an expanded role in providing health policy advice, the sources said. Gupta later spoke with Tom Daschle, Obama’s White House health czar and nominee for Health and Human Services secretary, and other advisers to the president-elect.

Next on the list will be Oprah for Secretary of Self-Help. I kid, I kid. I love Sanjay Gupta.