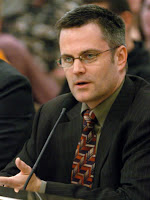 The Portland Oregonian today published an editorial calling for the resignation of openly gay Mayor Sam Adams in the wake of his admission of a sexual relationship with a then teenage former staffer.

Adams said this week that he lied because he did not think voters would believe him if he said that his relationship with Breedlove was not illegal. Perhaps he was right, but it was not renewed faith in the judgment of Portlanders that prompted the mayor to come clean with them. It was simply that he was being pressed by the Willamette Week newspaper, and the lie was not sustainable on any of several levels.

So now, Portlanders are left with a mayor whose election was built on a lie. Nobody knows how the election might have turned out if Adams’ conscience had gotten the best of him in a more timely way. But he preferred not to put it to the test. Nobody — not even the mayor — knows if his sense of right and wrong will fail him again, but he is asking us to give him another chance. In his Tuesday news conference Adams responded to one question this way: “If it’s no longer in the city’s best interest for me to stay on, I will resign.”

He’s already said he doesn’t plan to quit, but we submit that it is not in the city’s interest to have a mayor who cannot vouch for his own character under fire.