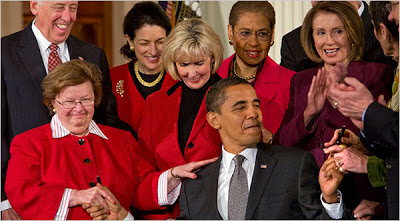 Barack Obama signed his first bill today. The act extends the statute of limitations for workers that want to sue their employers for unequal pay.

Mr. Obama was surrounded by a group of beaming lawmakers, most but not all of them Democrats, in the East Room of the White House as he affixed his signature to the Lilly Ledbetter Fair Pay Act, a law named for an Alabama woman who at the end of a 19-year career as a supervisor in a tire factory complained that she had been paid less than men. After a Supreme Court ruling against her, Congress approved the legislation that expands workers’ rights to sue in this kind of case, relaxing the statute of limitations.

“It is fitting that with the very first bill I sign — the Lilly Ledbetter Fair Pay Act — we are upholding one of this nation’s first principles: that we are all created equal and each deserve a chance to pursue our own version of happiness,” the president said. He said was signing the bill not only in honor of Ms. Ledbetter — who stood behind him, shaking her head and clasping her hands in seeming disbelief — but in honor of his own grandmother, “who worked in a bank all her life, and even after she hit that glass ceiling, kept getting up again” and for his daughters, “because I want them to grow up in a nation that values their contributions, where there are no limits to their dreams.”

You may recall the TV spot that Lilly Ledbetter did for Obama during the campaign.