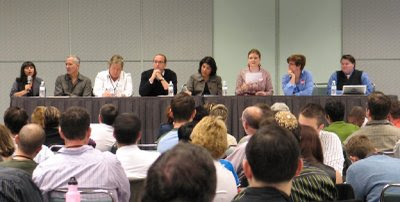 Rex Wockner has posted a recapping of the Equality Summit now going on in California, where leaders of the marriage equality movement there have expressed regret over hiring professional lobbyists to run the No On 8 campaign. An excerpt:

More than 400 gay activists gathered at the Los Angeles Convention Center Jan. 24 to organize and strategize to win back same-sex marriage in California. But attendees at the daylong Equality Summit spent just as much time looking backward — at the errors made by the leadership of the No on 8 campaign in its failed effort to stop voters from re-banning same-sex marriage.

And, for the first time since the Nov. 4 election, several of those leaders publicly detailed what they did wrong.

“When I look at what was the biggest mistake, when I lie awake at night prepping my e-mails I’m going to send to all of you and I think about the biggest mistake that we made, it’s that we’ve turned everything over to political experts and political consultants,” said Equality California Executive Director Geoff Kors. “And I would never ever do that again. You know, when we started Equality California, everyone was, like, ‘Hire professional lobbyists to go lobby on LGBT issues,’ and I was, like: ‘You gotta be kidding. We’re going to do our own lobbying because it’s about our lives and we know what we’re talking about and we know how to do this.’ One thing, you know, that I would never do again … we should have been in the strategy room and part of those (consultants’) conversations, and that was a huge mistake.”

Wockner notes that some are complaining about how summit organizers are handling dissent from outsiders at the conference.

“Today is about the same people … taking control of anything that goes forward, being in charge, and collecting the money and having the power,” said Miki Jackson, a longtime lesbian and AIDS activist in Los Angeles. “These people are control junkies, they are power junkies, and we are at their mercy,” Jackson said in an interview, singling out Kors and Kendell by name. “They’re up at the podium and they’re talking at everyone. … Grassroots people can’t even stand up and ask a question. It has to be read (from a notecard) by a moderator. There isn’t a rift between the grassroots and the No on 8 usual suspects — there is a wall they have built. We have a place, and they want us in it. You can see it here today.”