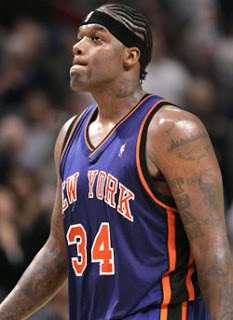 New York Knicks star center Eddy Curry has been hit with a sexual harassment and racial discrimination suit by his former chauffeur.

The stunning court papers claim Curry, a married father of three, repeatedly approached chauffeur David Kuchinsky “in the nude,” allegedly telling him, “Look at me, Dave, look” and “Come and touch it, Dave.”

Curry also made Kuchinsky perform “humiliating tasks outside the scope of his employment, such as cleaning up and removing dirty towels [Curry had ejaculated into] so that his wife would not see them,” the Manhattan federal court suit says.

Kuchinsky, who is straight and Jewish, also alleges racial discrimination, saying that Curry hurled slurs at him including “f—ing Jew,” “cracker,” “white slave,” “white devil” and “grandmaster of the KKK.”

And in a disturbing episode reminiscent of some of the evidence in the manslaughter case against former Nets star Jayson Williams, Kuchinsky further claims in his suit that Curry pointed a “fully loaded” gun at him on at least two separate occasions to keep him from complaining about his treatment. “Look, I have one in the chamber,” Curry allegedly said. Kuchinsky, who worked for Curry from October 2005 through October 2008, says he was initially hired as an around-the-clock chauffeur for Curry and his family at their Burr Ridge, Ill., mansion. But shortly after starting work, he soon found his duties fell well outside his job description and “progressively became Curry’s “house-boy,'” his suit says. He is seeking $98,000 plus compensatory damages from the injured Knick, whose contract pays him $9.4 million this year.

Curry’s attorney says the charges are “absolutely untrue” and are part of an escalating pattern of blackmail over a salary dispute. The chauffeur is an ex-con who has spent three years in prison.