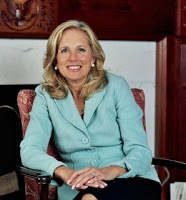 Jill Biden: Joe Was Offered Either VP Or Secretary Of State Joe Biden’s wife said Monday that he had his pick of being Barack Obama’s running mate or the secretary of state nomination that eventually went to Hillary Rodham Clinton, a slip that the vice president-elect immediately tried to shush. Jill Biden’s comment came during an appearance with her husband on “The Oprah Winfrey Show,” taped at Washington’s Kennedy Center on the eve of the inauguration.

“Joe had the choice to be secretary of state or vice president,” she said. Her husband turned to his wife with his finger to his lips and a “Shhhh!” that sent the audience into laughter. “OK, he did,” Jill Biden said in her defense. The vice president-elect blushed, grimaced and gave his wife a hug while the audience continued to erupt in laughter. “That’s right,” he finally said to his wife. “Go ahead.” Mrs. Biden said she told him vice president would be better for the family. “If you’re secretary of state, you’ll be away, we’ll never see you, you know,” she said. “I’ll see you at a state dinner once in a while.”

Joe Biden’s spokesperson immediately denied Jill’s story, saying that Biden had only ever been offered the VP slot. You have to wonder what Hillary Clinton thinks of this story. If she already knew, it’s still a burn. If she didn’t know, it’s really a burn.