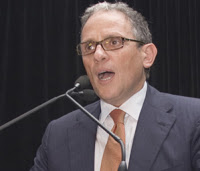 Hochberg Pushed For Sec. Of Commerce The Victory Fund wants former HRC board co-chair Fred Hochberg to replace Bill Richardson as Secretary of Commerce. It would be Obama’s last chance to put an openly LGBT person in his cabinet.

Denis Dison, spokesperson for the Gay & Lesbian Victory Fund, said his organization and the Presidential Appointments Project continue to encourage Obama to nominate an openly gay person for his Cabinet and that the new vacancy “presents another opportunity for them to look at an LGBT applicant.”

Dison said Hochberg, a gay man who previously was under consideration to head the Small Business Administration, is “out there today as the best chance the LGBT community” has for a nominee as commerce secretary. “And the good thing is, he is qualified,” Dison said. “If you look at his background and look at his role in business and in government, you know it’s somebody who could step into that role.”

Dison said he has no “inside knowledge” regarding whom Obama is considering for commerce secretary or what the chances are for a gay person to fill the position. Hochberg serves on the Obama transition team and declined to comment for this article. He served as deputy and acting administrator of the SBA under President Clinton and until recently was the dean of Milano, the New School for Management & Urban Policy in New York. HRC spokesperson Brad Luna told the Blade last month that Hochberg is a “major donor” to HRC, a former board co-chair, an emeritus member of the board and a member of HRC’s public policy committee.

UPDATE: Politico is reporting that Hochberg will be named to head the Import-Export bank.