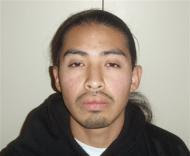 Four arrests have been made in the case of the Bay Area lesbian who was gang-raped last month.

Two men and two teens have been arrested on suspicion of gang-raping a woman last month in the San Francisco Bay area while allegedly taunting her for being a lesbian, police said Thursday. Officers arrested Humberto Hernandez Salvador at his Richmond home Wednesday night, Richmond police Lt. Mark Gagan said. The 31-year-old is being held without bail on gang rape, kidnapping and carjacking charges.

Police on Wednesday also arrested a 15-year-old Richmond boy and a 16-year-old Hercules boy, who were being held at a juvenile detention center on similar charges. Their names were not released. Josue Gonzalez, 21, turned himself in Thursday after police announced they were searching for him. He was wanted on charges of gang rape, kidnapping and carjacking. Gagan said Gonzalez asked for an attorney when he turned himself in but said nothing about his alleged role in the attack. “We feel that while these four suspects were at large, a large cross-section of our population felt unsafe,” Gagan said. “Now that the fourth one is behind bars, we can all breathe a sigh of relief.”

Police would not detail each person’s alleged involvement. Tips from local residents led to the arrests. Detectives say the 28-year-old victim was attacked on Dec. 13 after she got out of her car, which bore a rainbow gay pride sticker. The alleged attackers made comments indicating they knew she was a lesbian, police said.

The case will be prosecuted as a hate crime.