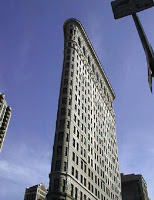 NYC’s iconic Flatiron Building is going to be converted to a luxury hotel.

New Yorkers are happy to hear the iconic Flatiron Building may open as a world-class hotel, even if it is 10 years down the line. “This sounds like one development project that actually makes sense,” said Johnanna Acevedo, 36, who lives in the neighborhood and works in real estate. “I only see winners in this deal, I don’t see any downside.”

The Daily News exclusively reported Monday that Italian real estate conglomerate The Sorgente Group bought a majority stake in the landmark. It plans to gradually take over the rest and transform the office space into a hotel. Despite the economic downturn, experts say there is demand for more hotel rooms in New York City, where occupancy rates are still way above the national average. “Now is the perfect time to think about building a hotel because of the long construction time involved,” said John Fox, a hotel industry expert in Manhattan. “Up until this fall, city hotels had been on a steady upward climb since the months after 9/11, and that will more than likely continue in years to come.”

Fox said city hotels have been at about 85% occupancy since 2006. While levels may stay lower than usual in the coming months, there is still a shortage of hotel rooms in the city. He thinks the Flatiron Building is an ideal spot to add more. “It’s a landmark structure and it’s immediately recognizable,” he said. “Because of the way it’s situated, the views from the rooms will be good, and that’s a neighborhood with a diverse group of businesses and restaurants.”

The views may be great, but those are going to be some funkily shaped hotel rooms.